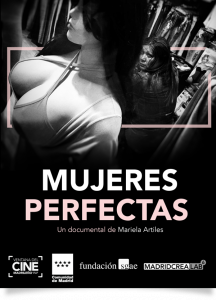 This documentary looks into the interiorised sexism in women that together are searching for answers and ways to unlearn. There is a hidden sexism in the European society that hides a worrying fact; we are in a sexist society therefore we are all sexists. We will meet many women that are fighting for equal opportunities and wonder what will be their reaction when putt in front of the “female south American high society” not the unprivileged, the privilege ones, the other half, openly sexists in a society that still living in the MAD MEN scenario in the XXI century fighting to keep it that way for generations to come. Up to what point can you sympathise?.
Awarded the funding for feature film project development by CAM, Comunidad de Madrid and SGAE.

To ALL I LOVE,

Do not grieve for me. My nerves are all shot and for the last year I have been in agony day and night—except when I sleep with sleeping pills—and any peace I have by day is when I am drugged by pills.

I have had a wonderful life but it is over and my nerves get worse and I am afraid they will have to take me away. So please forgive me, all those I love and may God forgive me too, but I cannot bear the agony and it [is] best for everyone this way. The future is just old age and illness and pain. Goodbye and thank you for all your love. I must have peace and this is the only way.
— Jimmy.[88]

The changes in technology and closing down of local cinemas put all the exhibitors, distributors, director and audiences in a new place that connects them all in the present, future and past and frames everything together.
Premiered at the SEMINCI film festival 2013 and distributed worldwide by Agencia FREAK. Sales agent FEELSALES.

Childhood is the happiest time of your life.

Documentary 21 min.
Directed by Oscar de Julian.
Produced by Mariela Artiles 2015.
First awarded with the distribution Madrid En Corto. After that it has 5 awards from 3 festivals and 21 official selections in competition.

Too many memories for just a man.

In a very conservative family 3 brothers are getting ready for their mother´s funeral, her last wishes of being burry with a non-very traditional costume make flourish deeper discussions.

Candella collaborated with Manchester-based theatre group China Here and There on a piece that would express the cultural values and experiences of China's uniquely matriarchal Muo Su community.

The production process began with Chinese students from the university taking Candella's The World According To Film course. Through workshops and discussion the story, characters, and situations were developed. The students continued to work closely with Candella throughout the film's development and production, ensuring that the actors and director were able to reflect accurately the experiences of a Muo Su woman in the UK.

The film's crew was also selected to maximise the educative potential of the project. Film students eager to gain experience and knowledge were paired with top industry professionals, such as production designer and storyboard artist Richard Jeffers, who had just finished work on Tim Burton's The Corpse Bride, and soundtrack composers The Montgolfier Brothers, recently approached to score the next film by Spanish master Bigas Luna.

How trapped emotions affect Oscar’s daily life and a warning from dreams start to wake him up from his status of a nearly but not enough feelings of success.

A documentary that entangles a way of living, strength and literature of the Spanish writer Camen Martin Gaite.